I’ve been running Mac OS X 10.7 Lion for about two hours now, but it didn’t take me that long to notice that something was seriously off with the mouse acceleration. I found myself overshooting pretty much every small target I tried to hit with my mouse. In fact, I felt like I do when I’m forced to use…Windows!

Now, Apple has been making concessions to switchers from Windows for years. I’m happy to say that they outnumber the longtime faithful (means the platform is getting successful), and mouse acceleration has been a sticking point for switchers, so changing to a more Windows-like curve is probably the right thing to do. This is small consolation to me, since it doesn’t change the fact that right now, I can barely use my mouse.

How do I know that mouse acceleration has been a sticking point for switchers? Arguments on the Internet, how else? Because of my participation in said arguments, I happened to have a picture of my old preferred acceleration curve: 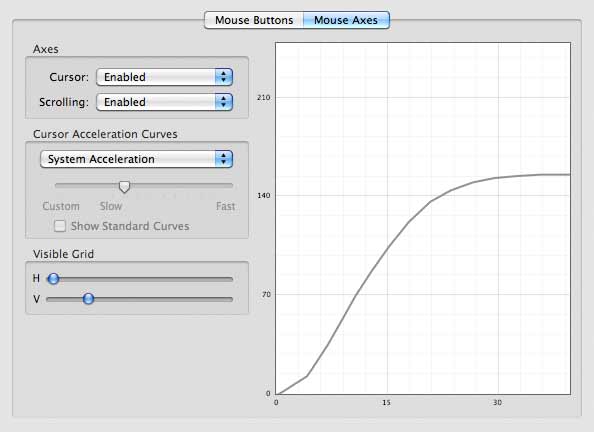 This screenshot, by the way, comes from the excellent ControllerMate, which you can use to configure any arbitrary acceleration curve you want (among many, many other things.)

Here’s how things look under Lion: 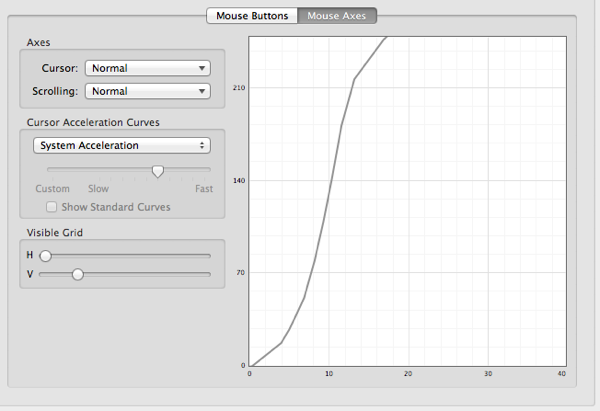 Ouch! No wonder I’m overshooting things. That curve is way steeper than what I’m used to.

Fortunately for me, I didn’t even have to draw a custom curve, since the old curve is still there. Did you know that every notch in the “Tracking Speed” slider of the “Mouse” preference pane in System Preferences is actually a different acceleration curve? My old curve, which used to reside one notch left of center, is now the second notch from the left. I discovered this, again, because ControllerMate lets you see all the OS standard curves.

So, don’t worry; you’re not crazy; your mouse is actually running faster under Lion. Thank goodness the fix is as simple as turning the speed down.